Redneck Mother at 25 and a cover in the top 6 make me irrationally angry.

And I love his version of Choctaw Bingo.
Top

I hate to quibble with a list by someone thoughtful enough to list 25 RWH songs, but quibble I will. I absolutely love that he put Mother Blues in the #1 spot and I can live with the omission of a few of my favorite RWH songs (Ballad of the Crimson Kings, Three Days Straight, Loose, Beauty Way, Coricidin Bottle, Too Young Ripe and a few others), HOWEVER, it is nothing short of criminal to completely omit The Messenger from this list. The Messenger is literally a thing of fucking beauty and if you asked Ray himself (as I once did in that 3dd interview - man, I still can't believe I did that) which song of his means the most to him, he would say The Messenger. That said, god bless Mr. Ray Wylie Hubbard, there aren't many like him left.

Every time I listen to Ray Wylie Hubbard I realize that I don't listen to him nearly often enough. He's everything that I love in an artist and is a master of a style or genre or whatever that I am particularly fond of but for so e reason I don't listen to him all that often.
A single shot rifle and a one eyed dog.
Top

RWH on Eric Church and Waylon...


so eric said lets write a song about a desperate man. i said i once was so desperate i went to a fortune teller to get my future read and she said i didn't have one. he smiled and laid down this groove and we rode it to town.
so thats how that happened and i guess you figured out i can keep a secret.
a few weeks ago he called and said they were doing a video shoot for the song that was a period piece set in the 70's and they needed a guy who looked like a miami vice cocaine cowboy drug runner and every one he talked to suggested me so would i be interested.
i said i got the perfect face for radio but any close up would scare the children.
so i went up to nashville and did it.
i wasn't wild about wearing a leisure suit and a polyester shirt with a collar the size of buzzed wings and a gold chain at first but then i felt pretty stylish after a while.
comes out monday.
eric has done a bunch of stuff he didn't have to do like namedropping me in a song, asking me to come sing with him in dallas at that huge place, singing on tell the devil i'm getting there as fast as i can, coming to austin at his own expense to be a part of my induction into the texas heritage songwriter hall of fame, asking me to write a song with him that is the title of his next record and being in his video.
between takes we were setting of this couch and i asked him why he did all this and he said he had been a fan of my writing since he first started out and wanted more people to become aware of me.
we sat there for a minute as they were setting up the next shot and all i could manage to say was thank you.
i was reminded of the time i opened for waylon in santa cruz at an all day thing and we had played early and how after we finished our set we had to leave for another gig but the promoter was dodging us and dragging his feet in paying us and will byrd who was waylon's road manager at the time ran into us and asked why we were still there as he knew we had to split and we told him we hadn't been paid and he said hang on i'm gonna tell waylon and then about 5 minutes later the promoter came in with 2 girls from the concession stand and he paid us our thousand bucks in twenties, tens, fives, ones and 4 rolls of quarters. he said go tell waylon you got paid cause he said he wasn't going on stage till you were squared up.
i guess there are some cats who no matter how famous they get care about the ones who still struggling.
i got to put eric in their company.
and..
eric's wife katherine bought a hat from my website.

I've liked RWH for awhile, but I've gone off the deep end in the past 10 days. He's incredible.
Top

This week Ray played the grand old opry for the first time and apparently it was a big deal. Here's what he had to say about it.


so we get into nashville and go to tyler bryant and rebecca lovell's house to rehearse with her and megan and pam tills shows up and their living room was beatific. in the future pilgrims will honor the room with a..okay. maybe thats a stretch but it was pretty heavenly. megan and rebecca are just righteous musicians and singing with them on loose chilled my bones and then pam on the messenger..well, nothing can match that.
we get to the opry the next day and they got the sign there for the parking space.
now the staff and crew were top notch; asking if we needed anything bout every 20 minutes and were smiling and nice and so accommodating.
aaron lee tasjan, jamie harris and mary gauthier show up as do jeb and chad from red 11 and kos and jake from bmg and i did a video thing and tyler bryant waked in cool and it was a time. then its our turn and pam gives me this incredible introduction and i thank her and say i can hardly wait to hear me and we do snake farm. i did the singalong thing and there was confusion for a moment then smiles and they sang along.
now for some reason i decided on the old obscure song loose cause i knew megan and rebecca would nail it to the church door.. they did and kyle and lucas threw down the rock and roll gauntlet and the walls of the opry vibrated and shivered.
then pam came out and we did the messenger and i looked back and thought i saw judy wipe a tear from her eye and then caught a glimpse of me on the big video screen behind me and thought "damn. i'm gnarly but i got on some cool rough out pointed toe cowboy boots."
i got to thank pam for going to bat for me and bringing to the opry's attention that i had never done it and thank them for allowing me to stand in the circle.
met with 30 tigers the next with darby to talk about the new record and plot.
then there was a big gibson guitar showcase at the something horse..wild, white, whatever in downtown and aaron lee and lee roy parnell and lucas and the house bass player and keyboard (sorry didn't catch their names, but they were great) and me made some rock. every lick ever played in the key of E, well seems it was played in "wanna rock and roll." was a thrill.
so that was this week.
some one asked me didn't i think 72 was a little old to be making my debut at the grand old opry and i said well, i didn't want peak too soon.
so don't give up on them dreams just cause fate got a different timetable than what you think.
yours truly,
ray wylie

"some one asked me didn't i think 72 was a little old to be making my debut at the grand old opry and i said well, i didn't want peak too soon.
so don't give up on them dreams just cause fate got a different timetable than what you think."

Tell it, Ray Wylie, tell it!
Shut up and vote.
Top

Brand new Ray Wylie with Chris Robinson, Ringo, Joe Walsh and Don Was
I had my ticket, but 2020 got canceled
Top 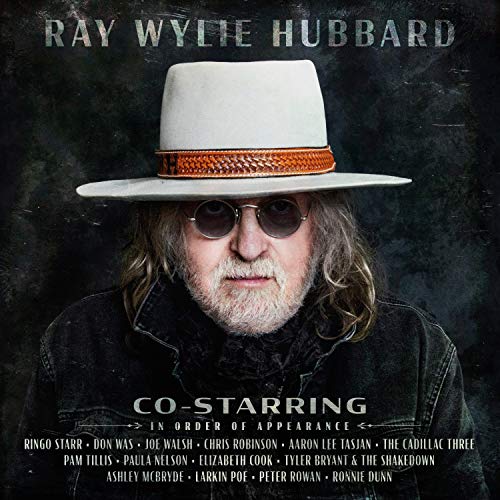 Yet another great record full of wisdom and truths, wailing and moans, low down greasy texas blues, and more rock and roll and gear shout-outs than you can count from my man Ray Wylie Hubbard. This time he's got different collaborators for each song, including Elizabeth Cook, Ashley McBryde, Aaron Lee Tasjan, Ringo Starr, Joe Walsh and Chris Robinson. The guitar playing, on every single track, is just out of this world. His new version of his own song The Messenger, full of cello and strings, closes the record and is especially beautiful. Great stuff.
I had my ticket, but 2020 got canceled
Top
Post Reply
100 posts