Talk about the songs, the shows, and anything else DBT related here.

Sterling Bigmouth wrote:My memory might be bad, but was Go-Go Boots the only album that didn’t have any songs played?

Huh? Pretty sure I saw "I Hear You Humming" on all three set lists.
Hey ho let's go!
Top

Sterling Bigmouth wrote:My memory might be bad, but was Go-Go Boots the only album that didn’t have any songs played?

Huh? Pretty sure I saw "I Hear You Humming" on all three set lists.

In case you're wondering, this is why you will not be dj'ing my next birthday party.
It's a battle for the very soul of the USA
Top

Clams wrote: Huh? Pretty sure I saw "I Hear You Humming" on all three set lists.

beantownbubba wrote: In case you're wondering, this is why you will not be dj'ing my next birthday party.

Clams wrote: Huh? Pretty sure I saw "I Hear You Humming" on all three set lists.

beantownbubba wrote: In case you're wondering, this is why you will not be dj'ing my next birthday party.

This is the funniest shit I've read on 3DD in a while. This place wouldn't be the same without you two.

Probably best not to encourage them, but if you do be sure to blame Clams.
Rickey needs Rickey's houses to be clean
Top

x2! not able to shake HC fever (not the crud, the good kind) so thanks for taking the time to capture these shows!
We got messed up minds for these messed up times...
Top

I always download the shows I see and go back and listen later to focus on what I hear and not what I saw at the time with the inevitable audience distractions. Every single time, my reaction is "hell yeah, I saw that shit." I wouldn't get that opportunity without the tapers, particularly Team Dirty South.

Beyond the shows I've seen in person, I'm later to the game than most of the folks on 3DD. With access to recorded shows going several years back, I was able to understand the transformation of the band over time.

So thank you for the documentation, past and present. DBT is great in studio, but they've always been about the Rock Show. The work you tapers do captures the band at its best, and we can all experience the shows that time or distance prevented us from catching live.
The engines have stopped now
Top

So much fun. I was sorry I was too tired to attend the hang out, but there is always next year! I wont forget this one, took a tumble in the parking lot on Friday night and busted one finger and sprained another!! "Everytime I leave here somethin bad happens to me, like a busted hand..." Lol!
Top

Whew, I realize I'm late to the party here but since getting back from Athens it's been nonstop. Just got around to filling out the questionnaire for the 3DD book. Hope I make the final cut. Once again, it was a life affirming weekend of music and old friends. Too many mini stories to tell here. Although the crazy lady who tried to slip me a Mickey at Nuci's Space takes the cake! Hope to do it again next year. BTW... Anybody got a copy of the group photo from Saturday night?
Top

TDB wrote: Just got around to filling out the questionnaire for the 3DD book. Hope I make the final cut.

Thanks man, much appreciated!

Bunch of new submissions since HC.....keep 'em coming. You guys are some smart, funny, joyous, and poignant mofos. If you were thinking you'd eventually send something in, please knock it out. If you weren't, please reconsider. Let's get the full fan spectrum in the book - the more complete a picture, the better.

Link to questionnaire again: https://promokitchen.formstack.com/form ... oming_book Remember, this isn't just for people who come to Homecoming....its for all DBT fans with something to say. Thanks.
Top

Checking in late. Been rockin' the kitchen remodel at my daughter's condo since the day I got back

Thanks to my good friends Dean (the Tequila Cowboy--Henceforth known as the Tequila Gentleman--you had to be there) for his kind words. And to Sarah Henderson who lives by the phrase "follow the money". Both of them have been instumental in making our fundraiser what it has become. 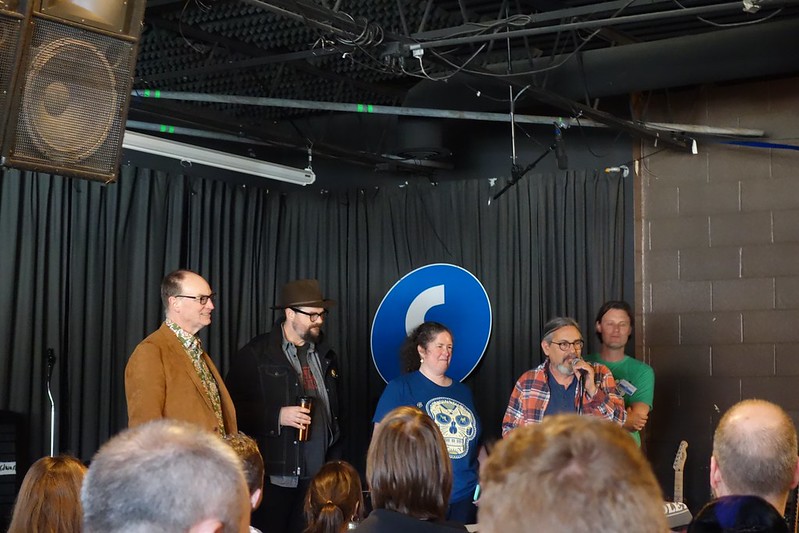 I don't think any of us thought that 7 years ago "Hey ya wanna do a fundraiser" would turn into this. 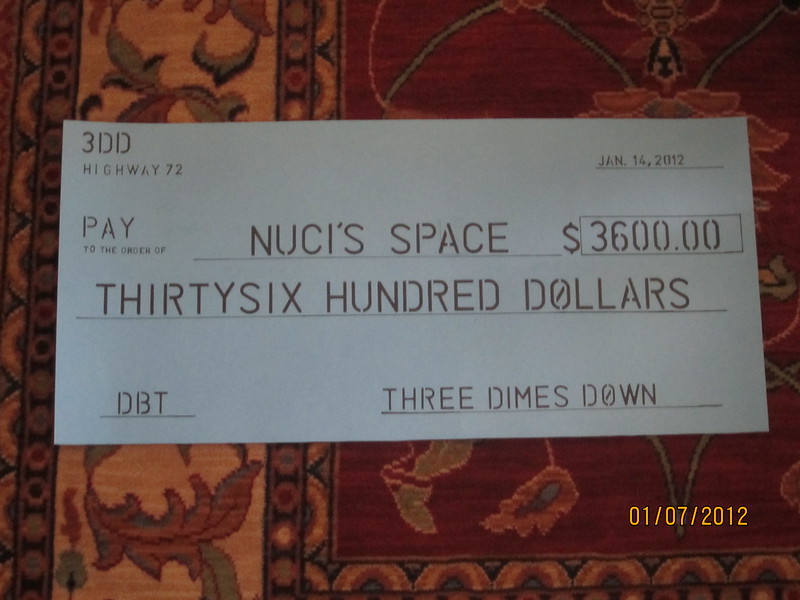 And I say this every year but thanks again to the filmers for giving up a night at the Rock Show (you can see their names in the credits on the dvd). And thanks to the boatload of folks (3DD and NON) who've jumped on board to help expand this and bring it to new heights. But most of all, THANK YOU to this community for their generosity and love.

I heard there were 3 Rock Shows. I've got to find the time to catch one. Seriously though--after the Thursday night show, Patterson asked "How'd it go". I said it was a Saturday night show, what are you gonna do next? "You'll see". And boy did we. The unabashedly fanboyish description of the shows (of which we're all guilty) has been well documented by that Bubba guy so I'll leave it at that.

Never, ever doubt the redemptive powers of the Rock Show. I was moving a little slow after Thursday and even slower after a night of filming on Friday. Had a bright idea of catching a few tunes down front on Saturday (here I'm indebted to Nick Sainz for generously giving me his spot on the rail--and the whiskey). Well I stayed and rocked out for 3 hours. Woke up Sunday and felt great--like a 60yo again!

As per usual, the Friday night show was filmed so we'll all be able to relive it in all it's glory next year

My second homecoming is in the books. I really enjoyed seeing so many of you that I met last year and making new friends. As great as the music was, I'd think about coming to Homecoming even if I couldn't make the actual shows! After spending three nights at the Best Western, walking past the Days on the way to the Rock Show and having spent much of Saturday preshow at the Days, I think we just may stay at the Days next year. Maybe I have low standards, but it doesn't seem like half the dump y'all high-browed heathens make it out to be on here.

So Bryan and I talked on the way home. Trying to compare shows is always somewhat of a fruitless exercise, but I didn't think this year outweighed last year for me; the shows this year were still phenomenal, don't get me wrong. I guess there's nothing like getting the Homecoming cherry popped for me (last year). Bryan, on the other hand, thought this year's Saturday night and Thursday night were two of the best shows he'd ever seen (from any artist, not just DBT)!

How many more days till 2019 Homecoming?
Top

I've posted a review of every Homecoming I've attended so I guess after a few weeks I should do one for this year too...

Wednesday was great. It was nice to catch up with everyone and Patterson's set was really enjoyable. The afterparty at Flicker was just as much fun. And then Thursday I woke up feeling like garbage which seemed odd because I hadn't really overdone (at least not with booze) it the night before. I slept off and on all day finally getting up to get a shower and head to the 40 Watt for night 1. A few minutes into DBT's set we moved all the way to the back as I could tell something was seriously wrong with me. All I can clearly remember from that show was Late for Church, even though I was feeling like death I enjoyed the hell out of that. We actually left and missed the last 4 songs.

I was in a funk for almost 2 weeks. I didn't bother to check the setlists or reviews. Over the past week or so I've listened to the Friday and Saturday shows. Hate I missed them. We'll try again next year!
Turn you demons into walls of goddamned noise and sound.
Top

For the non torrent folks or folks who want mp3 (flac is also included).

Did the group picture from after the Saturday show ever surface anywhere? I would love to see it!

Similarly, is there an archive somewhere of all the Homecoming group photos? I never saw the one from when Jeremy and I came down in 2011 either!
she was all provocative and everything
until she saw what I was capable of
Top

Emily wrote:Did the group picture from after the Saturday show ever surface anywhere? I would love to see it!

Similarly, is there an archive somewhere of all the Homecoming group photos? I never saw the one from when Jeremy and I came down in 2011 either!

Maybe some of us dudes broke the camera!?!
Top

Emily wrote:Did the group picture from after the Saturday show ever surface anywhere? I would love to see it!

Similarly, is there an archive somewhere of all the Homecoming group photos? I never saw the one from when Jeremy and I came down in 2011 either!

It seems all the group pictures end somewhere else besides here, even the ones from the 3DD get together.
Don't hurt people, and don't take their stuff.
Top

As far as the hangout I haven't seen many from there making the rounds. There will be plenty in the book though.
Rickey needs Rickey's houses to be clean
Top

Oh that is beautiful. Thank you Dean!
she was all provocative and everything
until she saw what I was capable of
Top

Always go to the show
Top

Always go to the show
Top